The ukulele’s string order (GCEA) is the same set of intervals as the top four strings on a guitar (DGBE), simply up a fourth!

A fourth merely means a space of four letters between notes. You count each letter including your beginning note to get your fourth, e.g A to D (A, B, C, D = four) - an A chord on a guitar is a D chord on a ukulele.

This means that the same chord shapes you use for guitar can be used to make ukulele chords if you simply transpose that chord up a fourth.

Another example; the D chord, when you play that same shape on a ukulele, you get a G chord (D, E, F, G = four)

This can also be applied to minor chords or, in fact, any chord shape. – E minor on a guitar is A minor on a ukulele. If you move that shape to the ukulele it’s still minor, and up a fourth from E is A (E, F, G, A = four). So what you get is an Am ukulele chord. 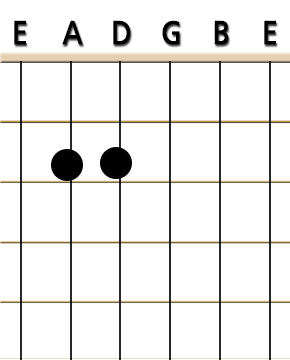 Just remember to make the transposition from the origin chord. So, an A shape on guitar = D on a ukulele. B minor = E minor. C 7th = F 7th, and so on.

On the guitar chord shape diagram just ignore the two strings on the left (the two nearest your chin) and use whatever shape is on the remaining four strings - that's it.

The illustrations below have the two strings on the left greyed out so that you can how it transposes to the ukulele chords. 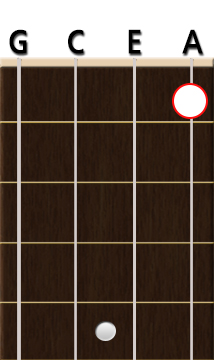